Cities and their sightseeing 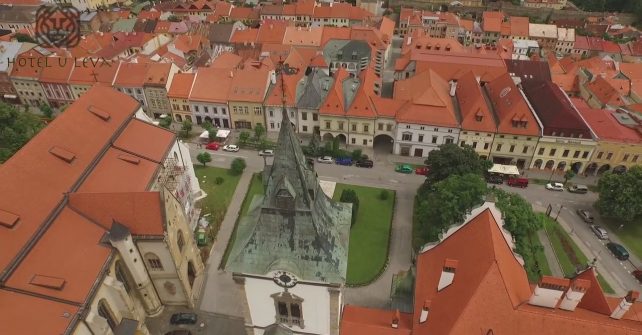 Levoca - the heart of Spis region

The old town centre is one of just a few superbly preserved examples of this type of urban and architectural design and has justifiably been declared an urban heritage reservation. Almost the whole perimeter of the town consists of medieval fortified walls, in which several bastions and three town gates are still preserved. The central square in Levoča is one of the largest medieval town squares in Slovakia. The town´s principal, dominating features are grouped in the centre of the square - the Renaissance town hall, the bell tower and St. James´s Church with its unique collection of medieval Gothic winged altars. The high altar is not only an artistic work of perfection, but rising to a height of 18.62 metres, it is also the tallest Gothic altar in the world It was created in the workshop of Master-craftsman Paul of Levoca.

The ancient town of Levoča lies on the southern slopes of the Levoča Hills in the middle of the Spiš region. The town grew from a group of original settlements already in existence here in the 12th century. 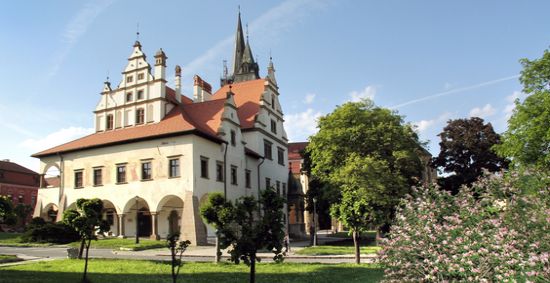 The first written mention of the town itself dates from the year 1249. In 1271 the town is referred to as the centre of the Province of Spiš Saxons, having acquired the rights of a Royal Free Town. Apart from the right to self-government, these included judicial powers, the right to mine for ore, cut timber, practise crafts and trading. In this way Levoča became the economic and market centre of the area, which also stimulated its cultural and architectural development. Levoča also became a place for meetings between leaders of European countries. In 1474 the town was visited by king Matthias Corvinus and in 1497 by the four Jagelov brothers, one of them being the Polish and another the Hungarian king. Continuing the tradition, in 1998 the fifth summit of Presidents of 11 Central European states took place here.

he lasrgest castle in Central Europe. The Unesco heritage together with the residence of Bishop of Spis in Spisska Kapitula (Chapter of Spis) and Romanesque church in a village Zehra with beautiful 13th century paintings. Surrounding stone fortification protected the inner Romanesque palace from the Tartars while raiding our lands in 1241. In the half of 15th century, king donated the castle to the noble Zapolsky family. They rebuilt the Romanesque palace into Gothic style, they thickened and elongated the tower and overall they took good care of the castle. Even if the family owned 70+ castles, Spissky Hrad was their preferred seat. Ján Zápoľský, the last king before Habsburgs, was born at the castle. Habsburgs gave the castle to Turzo family and they then rebuilt it in the Renaissance style. The last family that owned the castle (till 1945!), the Csákys, left it in ruins after the fire in 1780. After war, the castle underwent repairing, reconstructing and archeological research. Now, it serves as a museum and exposition piece at the same time. 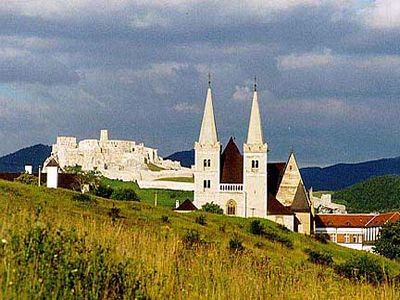 There are other beautiful locations worth a visit in this area. Spisska Kapitula, often called 'Vatican of Slovakia', is a part of Spisske Podhradie, province under the castle. Gothic architecture, Baroque decorations on houses, Romanesque churches, cathedral and on top of that, beautiful view on High Tatras.

The Church of the Holy Spirit in Zehra, one of the earliest Slovak settlements, showcases high quality wall paintings from the Middle-Ages. The complex is on UNESCO´s World Heritage List among 1.000 of the most important monuments in the world. 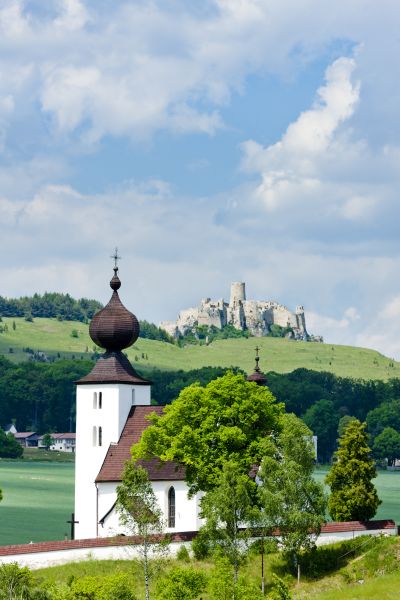 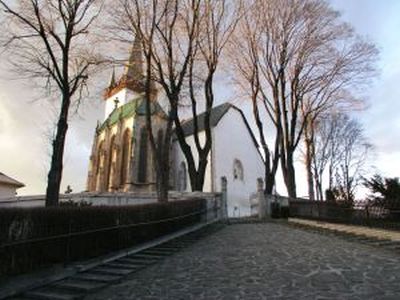 The village with a Gothic church with some Romanesque style features from the 13th century. The most beautiful Gothic chapel in Slovakia. The Zapolsky family founded a monastery of the Minorits Religion in 17th century. A village situated on an important historical intersection of the trade routes.

The first written reference to the village is from the year 1263. Later, in 1412 it became the seat of the Province of the 16 Spiš Towns (those which were not a part of the pledge by the Polish King). The Zápoľský family founded here a monastery of the Minorits´ Religion in 1672. In the village, there is a Gothic church with some Romanesque-style features from the 13-th century. At the same time, there is the most beautiful Gothic chapel in Slovakia - a cultural relic. 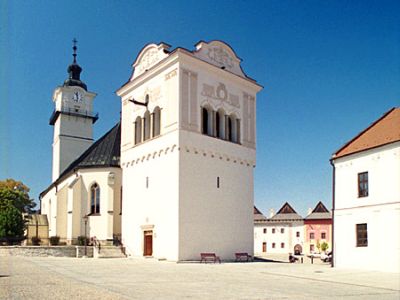 The royal town - now part of a city Poprad. Because of its intact medieval urbanistic character the town was declared Town monument reservation like Levoca, Kezmarok and Bardejov. Gothic Saint George church dominates the Spisska Sobota square. Its Gothic altar made in the atelier of Master Paul from Levoca belongs along with Levoca's altar to European cultural jewels.

Spišská Sobota represents one of the best preserved medieval urban units in Slovakia. Its core is a triangle-shaped square bordered by a row of burgher houses built on narrow medieval plots. The typical trait of the burgher houses in Spišská Sobota are tall shingled roofs with massive shingled cornices. The Roman-Catholic church of St George built before 1273 in the Late-Romanesque style, was rebuilt in the Gothic style in 1464. The church contains five Gothic altars. The Late-Gothic wing altars of St George and St Anton were installed in the years between 1503 and 1520 in the workshop of Master-craftsman Paul from Levoca.

The marble tablet informs that King Matthias Corvinus has spent night in the house which bears it.

The town combining like Levoca slavic and german settlements. In the 15th century it was granted the rights of a free royal town and received several privileges, e.g. right of store, having engendered the hundred - years war with the town Levoca. There were also many crafts working in Kezmarok that contributed to the development of the town. The medieval Kežmarok originated by merging of the main communities in one municipality.

In 1269 it obtained proper municipal self-administration and up to 1348 it was protected by municipal walls. The further growth of Kežmarok and the favourable economic development of the town by the end of the 17th century are documented by the existence of 21 guilds.

The buildings in the historic centre are the parts of theTown Monument Reserve. The walk around the town can start at the building of the town hall, which dominates the The Main Square. Hradná ulica street leads to theCastle of Kežmarok. The castle gained its contemporary Renaissance form after extensive rebuilding, proceeding in various stages in the years 1572-1624. The Basilica of the Holy Cross was built in the 14th century on the site of an older Romanesque chapel. The basilica neighbours with the Renaissance belfry of 1568, which is the oldest and certainly one of the most beautiful in the Spiš region.

The pride of Kežmarok is the Protestant wooden articled church. This Protestant church was built in 1717 next to an older sacral stone building from 1593, which today is a sacristy. This unique wooden building made of yew and red spruce wood was built without using a single metal component. The Baroque interior of the church is also made of wood. Of immense artistic value is also the church organ with wooden pipes. 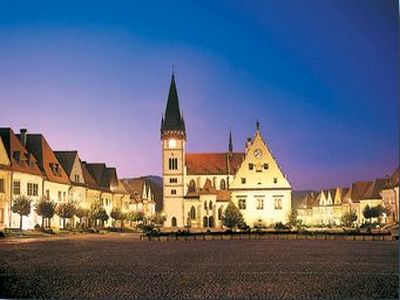 The historical gem of eastern Slovakia, Bardejov is a free royal trade and craft town like Levoca and Kezmarok. Bardejov is dominated by the monumental church of St. Aegidius. The fortification system from the 14th century is listed by UNESCO as one of the most complete and well-preserved example of a fortified medieval medieval town in this region.

Historically its real birth originated in a royal plan to revive an area raided by Mongols up to the 13th century. Over the next hundred years, the town was enriched materially by an influx of German colonists invited by the king, and fortified militarily – both of which set the tone for the town’s appearance up to the present. The unspoiled town cobbled square is a picture postcard view of town life in late medieval and early renaissance Europe. The dominant theme is rows of affluent merchants’ houses of German influence, each with its own variations of pastel colouring, roofing and other details. Several churches, the oldest two being some five hundred years old, pay tribute to a variety of architectural styles and periods, from authentic gothic to gothic revival, but for the most part the flavour is 16th- to 18th-century. There are several museums of period artefacts, the most unique of them dedicated to 15th-century icons. Around it all are the formidable town walls, with a number of well-marked descriptions. 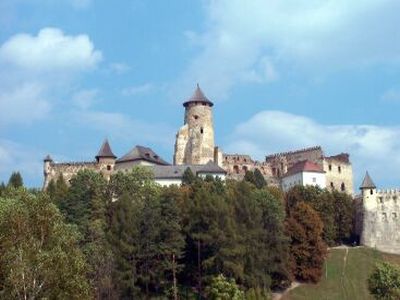 One of the most unique castles in Slovakia. Originally guarded the northern Hungarian border. It was for 360 years the seat of power of the custodians of the Spis areas that were temporarily given to Poland as a guarantee. Rulers met here in the past, it is the place where Polish coronation jewels were hidden and where famous adventurer, noble man and King of Madagascar, Móric Beňovský was imprisoned.

The Ľubovňa Castle was built at the turn of the 13th and 14th century, when it became a part of the boundary castles system in the north of the Hungarian Kingdom. Besides the protection of the former Polish-Old Hungarian border, its task was to secure the important trade route passing along the valley of the Poprad river to Poland. 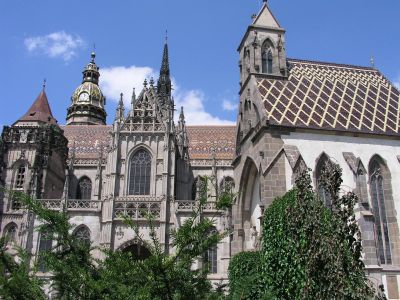 Slovak republic's second-largest city, prides itself on its long history of many cultures and religious faiths. Among others, Slovak, Hungarian, Ukranian, Polish and Romani peoples have left their mark, not least in the form of Roman Catholic, Greek and Russian Orthodox and Jewish houses of worship. The first written mention of Kosice is in a document dated 1230, a contract for sale of land. Kosice is reffered to as "Villa Kasa".

The Complex of the St. Elisabeth´s Cathedral, a National Cultural Monument, cosists of the cathedral, the chapel of St. Michael, and St. Urbain Tower. St. Elizabeth's Cathedral built between 1378 and 1508 is a Gothic masterpiece. Particularly imposing is the winged main altar with its three oversize statues and forty-eight panel paintings, while the lateral altars, Gothic wall paintings and sculptures add to the charm. 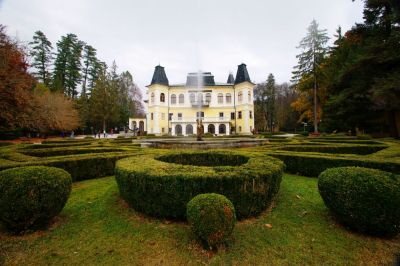 Betliar Castle was built in the first half of 15th century, gradually growing and forming by reconstructions. This hunting estate of almost 50 rooms was owned by the noble Bebek family and then Andrássy family for centuries, until 1945, when it became the property of the Slovak state and a National Kultural Monument. 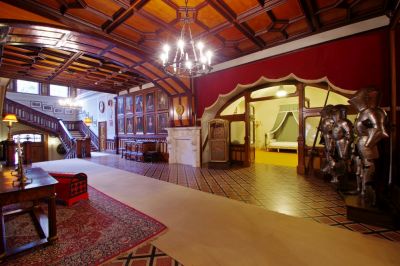 It is surrounded by a beautiful 80-hectare English park filled in with many rare wood species, metal garden sculptures, fountains and there is even an artificial cave and 8 meters high waterfall. They also had a menagerie there built in 19th century, that looks like a medieval castle and accommodated a brown bear, lynx and mouflons at the time. Interior of the manor house is very romantic and luxurious.

Among the rooms are a historical library filled with fine and very old volumes, winter garden, 8 bathrooms and many other stylish house-places. There are numerous paintings, decorations, souvenirs from hunts and abroad travels (for example an Egyptian mummy or samurai's armature), collection of hunting rifles, combat weaponry and many hunting trophies.